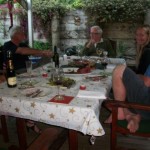 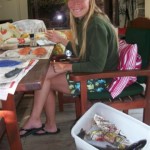 Has been a toad of a year. I have had two lots of chemo plus radiation, Terry has been diagnosed with mesothelemeoma(lung cancer caused by exposure to asbestos) , two of my brothers died and one of Terry’s sister in law died.

However we face 2013 with reasonable optimism, I am quite fit and Terry is determined to make the most of everything and hopefully will make next Christmas too.

This last week we have both followed our favoured pursuits, I have gardened myself silly and Terry has attacked the house with vacum cleaner, duster and mop. He still has to do that particularly male thing and spray the spiders and bugs. Imagine his horror the year we had a Buddhist tenant in the cottage who never killed anything. By the time she left the cottage was festooned in spider webs. She was nice though!

Flowering madly at the moment are the dahlias, star jasmine, but only a few roses, next burst for them is mid January. Vegies are good as well, but the quail try and get it, and now there are about 15 babies buzzing about like walking bumble bees also trying to get my vegies.

This last week we also had a lovely sail on a friend’s large catamaran on Tauranga Harbour. In the depths of winter they took us out as well. Tauranga is a lovely harbour- on a nice day!

The weather has been fabulous but wet this morning and probably wet for the next 7 days according to the forecast. That will make our planned al fresco christmas  feast interesting.

Terry is so indolent….