Duly went ahead as planned. Margaret- next scan Feb and that was me done and dusted. We then spent nearly an hour while T’s options were looked at.

Yes, 9 months if nothing is done and the x ray from early November compared with the x ray early October showed significant changes  for the worst in the right lung.” Could just be a poor shot so we will do another x ray next week” says the oncologist.  Lets hope it was just T breathing in.

We asked about the progression of the disease and he said you just get weaker and thinner until you die, the use of chemo slows it down of course. The oncologist will make a decision re chemo based on next weeks x ray. If the chest x ray shows no more changes  T won’t start chemo till after xmas, if it is looking worse again he will start next Thursday 6th Dec.  He would have 4- 6 cycles which would take 24 weeks- again is it worth that time for the amount gained?????

Life expectancy with chemo should be at least a year. Bit of a shit really.

My visit to the Dr for the aged may not have been a complete waste of time as my symptoms, pins and needles and numbness on my right side are symptomatic of a later age migraines!  No headache just a bit of blurred vision and the pins and needles. Gave me some drugs which I 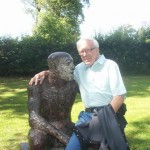 T has some funny friends!

may actually take however I am going to get a second opinion mainly to dimish the drug use if possible.So getting old as we know is not for sissys but it sure is time consuming and full of stress…

The visit before ‘the’ visit