I’m sure we do have a health system – somewhere

Just not when you need it. We were so impressed with T’s American niece’s husband(got that link!)  he was diagnosed and started radiation and chemo in 10 days from the initial Dr’s visit. Who says the Americans have a bad system. I know you pay for it but even when I tried to get T’s lung biopsy done privately he had to wait till the end of October. As usual the day after I started trying for a private visit we get an appointment at Waikato.

T does have to have a a biopsy of the pleura- part of the lung lining, done under anaesthetic and this will be done at Waikato. Now the appointment we have is for Thursday 25 October BUT that is only a meet and greet so goodness knows when they will do the biopsy. He also has  to have a breathing test , this will be done the day before at Tauranga. Never knew he had to have that suspect that Waikato insisted on it given the timing!

T is fit and apart from a hayfever induced cold he is well.

We are both exceedingly grumpy being overtired from getting the garden ready for November 5th when the Garden and Artfest starts.

For about three weeks I have been getting pins and needles- nasty nasty ones in my right leg and arm. last week I was way up on one of our steep banks and had an attack which immobilised me, panic- stroke I thought and smiled madly at myself to assure myself that I was OK.

Anyway tottered off the bank with a very heavy feeling leg and made a Dr’s appointment- got in – that day!

He poked and prodded, sent me with a letter to the pre Admission unit at Tauranga. Now that is a strange place, like a waiting room for hell. People in all sorts of extremis waiting to be seen and diagnosed(!) before either being sent home , to a ward or to the morgue.

I was poked and prodded several more times,even given a skull scan- yes there was a brain in there. Results came back and nothing showed up, I begged to be allowed to go home promising I would be back for the specialist in the morning. Duly returned at 8 am, plonked between a man with a swollen scrotum and a man who’ fell over at @*# club’. Lovely! I waited 3 hours and was then seen by the specialist whom I had encountered last when I had a colonoscopy two years ago. Hmm, S for brains !

He poked and prodded then prescribed beta blockers and mega cholestrol doses plus a promise of a MRI. I thanked him muttered at T that hell would freeze over before I took the drugs.

Oh yes, they found I had a heart murmer, apparently half the adult population has one!

So both back into the garden today and then apparently it is going to rain for the rest of Labour weekend.  We must be getting fitter as we both got up this am without groaning from sore limbs etc. 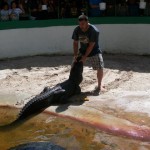