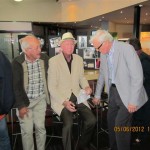 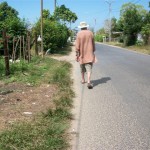 Terry either running to or away from the health sysytem.

Its either a go slow or the next day!!!! Think they must be trying to spend their budget.

We finally got to meet the Dr at Waikato, from Jaipur, seems a nice fellow.

Tis to go into hospital next Tuesday for a Video assisted thoracoscopy and biopsy. Means they knock him out then chop a hole in his side(we hope it is small) then dive in thru the hole with a camera for a looksee then follow that up with whatever medieval instrument they use for a biopsy.   ‘We will take several large pieces of the pleura’ said the doctor quite cheerfully.

If there is too much fluid in his lung they will collapse it, fill it with talcum then take the biopsy. Actually I think they collapse the offending lung anyway. then do the biopsy.

The talcum thing is a bit of a mystery but I am sure some of you know what it means.

Downside is he will then have a drain put in to drain away any nasties and may be in for up to five days!!!! ‘Light duties on return home’ said the Dr, Terry is to weed and I am to dig!

With a bit of luck we will know by the 6th what is wrong, and if not then , the 13th November- they meet and discuss on a Wednesday. The options for treatment if it is mesothelioma are: chemo/radiation, either on thier own or simply do nothing. T is a fan of the latter.

T has a very nasty liquid sounding cough- buggers- if they had seen him sooner rather than make him wait 6 weeks for the x-ray then another 6 weeks for this appointment he would be a lot better off. He is still working away and a bit miffed he will miss his Jury Service call next week.

Now as for me, I am barraged with hospital appointments- one for Dr in charge of the aged!!!!

Suggested they wait until I have the MRI they wanted done before they make any judgements. That was supposed to be tomorrow and the scan next Tuesday, have scrubbed them all for now. For now the osteopath is keeping the pins and needles at bay.

I’m sure we do have a health system – somewhere