Just another brick in the wall

Well it actually  felt like the first brick in my stomach wall.

A day after and  I am still  having nasty little stomach pains as the brick settles, no suppose it is from where the warhead was….

Nasty trip to Hamilton departing at 5 am in the dark and pouring rain- suited my mood actually. Two of the side effects. one from chemo- tinnitus(ringing in ears- all the time) and cystitus have both been visited upon me . The tinnitus after round four – and the last- of chemo and the systitus just to make life thoroughly miserable on Saturday evening. Sunday I took my usual a massive dose of antibiotics, felt queasy all day but by 5 am Monday the cystitus had gone.

The anaethetist got lost or didn’t turn up or something so we cooled our heels in a side ward for nearly an hour and half. I went to sleep, T nearly did but as he was sitting in a hard chair it was a bit more difficult for him- I was snug in a bed.

Finally about 9.15 I was knocked out- came to at 10 am yelping about the pain. Proceeded to yelp for the next two hours. Why are some nurses so mean with morphine, even the anathetist poked his head in to say I could have more….

The cause of all the pain was the goddamn catheter stuck into my poor sore and probably inflamed weeer. Just to make it worse when they inserted the warhead they filled my bladder, god almighty 20 minutes with an excruciatingly full bladder plus haveing to listen to Eric Clapton, how much should a poor body have to put up with.

Not sure how they fill your bladder  up while you have a catheter in- however having a full bladder was a prerequistie for external radiation. Can’t remember any mention last warhead day.

Gave birth yet again to loads of wadding and the warhead. Must admit Snitzel seems to know what he is doing down there. The nurse who is generous with the morphine said next time they would give me more painkillers while I was out to it- now why does it take 3 goes to get that right.

T said it was pretty dramatic whimpering accompanied by loud shivering noises. The nurse mean with the morphine kept snarling, keep your legs still, try that next time you think  you have hypothermia….

Anyway Snitzel said he could see no sign of the cancer, I asked why  did I need to come back…..

I was so full of morphine I 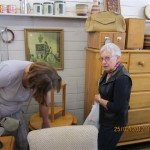 Collapsed into the car and slept all the way home- truthfully- I slept till 11 am this morning. Fine today and I may just totter down to the garden later…..