Mimi on someone else’s parade- please! 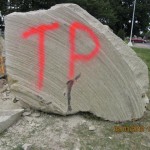 The Bullet in the raw

Yes, mimi means exactly what you think but has a more bilingual tone than the other word.

Last Thursday, Terry and I duly reported to the oncologist and were told that my NHL had gone into complete remission! Yeah!

Went home and had a bottle of bubbles to celebrate- yes- I shared it!

The week before last I had overnighted in Tauranga Hospital aftera snoop around my kopu! Well cervix etc  to us whiteys. Well after the bubbles the kopu started to bleed copious amounts so off we go th hospital, same old, same old process of waiting to get in. The gynalogical team are a bit faster in admitting people than the aches and pains team.

I was put into a ward with other kopus and old men with aches and pains. I was impressed as it was only two hours after I arrived. The charge nurse moaned about my condition as it would ‘mess’ up her sheets, of course I snarled, muttering things about patients surely being more important than sheets. She became my best friend, must have a note on my file saying ‘ This woman writes to the Minister!

Four hours later I am finally seen by the gyn registrar, had encountered him the week before, think he is from Somalia. I snarled about the wait of course, he replied about the babies he had delivered, we called a truce.

He then poked,  around threatened me with surgery in the middle of the night but backed off when he realised what the time was. Muttered apologies about the delay and actually gave me a sleeping pill. Dr John would see the offending kopu in the morning.

Dr John appeared about 11 am and gave me the results of the tests done the week before, cervical cancer plus some very suspicious nodes in the uterus. Yes, a hysterectomy and radiotherepy.  My results would be sent to Auckland as it is not a surgery they do in Tauranga- think he meant the type of hysterectomy as I k ow plenty of wahines  who have had them done in Tauranga.  Would be in about six weeks time.

I bled on , now being pumped full of antibiotics. Slept thru most of Friday and Saturday, helped along by their sleeping pill supplemented by one of mine at 3 am each morning. I had to place ‘my pill’ strategically so I did not drop it.

After dropping me off at the hospital and being their for the first bit, Terry went home, of course the sculpture syposium is on in Matamata and he  was off on Thursday morning till Sunday night. His sculptures are looking good.

I was biffed out on Sunday and got Fiona and Graham to come and get me. Shall really miss them when they go.

Slept for a few hours  till T came home then I bawled my eyes out. Drank more bubbles and today I feel quite a lot better. Still on anti biotics . Visit the Gyno tomorrow for a bit more detail on the next part of the process.

T has a ‘rest’ day so he is coming  as well. The symposium finishes on Saturday, and really there was nothing he could do, better being at Matamata.

Raining again and the weeds are roaring up.