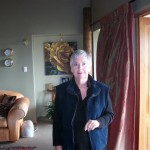 After a final burst of gardening- riping out clivias from a near vertical bank and transplanting some  renga rengas, plus getting the house in order we drove off with less than a hiss and a roar to Tauranga Hospital.

We are getting very laid back after two visits , we were 5 minutes late.  It is weird,  you build up to the chemo during  chemo week and when you get there you just amble in past reception to the “Treatment Room’. The Treatment room is about the size of a small school hall and just as utilitarian. It is divided down the middle with a half wall, each side has 5 lazy boy chairs on each wall, 20 in total and a couple of beds which are rarely used. I personally hate the lazy boys, too high, plus to get the foot rest out requires the strength of a navvy and to get it down is the same plus it sort of ejects you… I keep going to the loo to a minimum.

There are magazines etc available , you get tea and coffee but must take your own lunch!

The Oncology Centre where the above is situated was built from memory with a lot of donations. Only opened a few years ago prior to that people from Tauranga had to go to Hamilton- still do for radiation.

Anyway I was hooked up to my drip where I sat for the next five hours as various potions are poured in, over a litres worth- quite a lot of saline.

Bad news is my white cell count is way down and this time I cannot get away with it and have to have an injection of Pegfilgrastin which I think is a type of growth hormone- stimualtes  white cell growth apparently. Side effect is achiong bones for a few days-‘similar to a bad dose of the flu’ – oooh lovely just what I need…. The district nurse comes tomorrow to administer the jab- on a Sunday!

Usual swollen hands and feet but they will go down soon. The thought of the Sunday jab is upsetting me as I have been pretty well and don’t want to upset the health applecart.

My hair is now very thin, but can get away with it for a time yet- well maybe a a week or two….

Yes, it is like a bad dose of flu, aching joints and a bit snuffly but not too bad, just hope it does not last too long as it could seriously interfere with my garden plans. T is sighing with relief at the slow down of activity.