Nothing that happened over the 14-16th June endeared air travel to me-but does it ever! Well lashings of champagne does help but the dehydration can be debilitating!

We left half an hour late and Terry drove like a madman to the Auckland airport. Thank heavens for the new bypass at Manakau.

Only really funny thing that happened was during a trip into KL. Kl is full of large shopping malls and we were dropped off at one by our taxi driver. Wandered about and thought how pricey all the stuff was,  toddled into an exotic sock shop manned/womaned? by two young Malay girls who burst into hysterical laughter at the sight of me. Didn’t think I looked that odd in my pink paisley pants and yellow t shirt, but think the combination was just too much for them, they giggled so much that any chance of being served was eliminated. We  walked out to thesound of girlish giggling.

Oh yes, on the way into Kl from the airport hotel we ran into a tremendous rainstorm, fork lightening the lot. Car stopped at one stage due to the surface water causing momentary lack of vision.

T and I had a somewhat heated debate as to what we were going to do when we arrived in town, having no desire to get soaking wet. Miraculously, as it happens in the tropics, it cleared up and the sun was shining when we reached our destination.

After the gigglers in the mall we ventured onto the monorail system and whizzed around central KL, really easy to get about. Found the only place I recognised from 25 years ago- Merderka Square, now home to the Selangor Club plus an enormous and most unusual fountain. The British facade of the club has been largely covered with balconies etc- used to look very mock tudor. Still has a large green lawn in front of it but also has a four lane highway whizzing past which does not do a lot for the ambiance.

Saw the twin towers and the telecom tower and grabbed another taxi back to the airport hotel. This is the third time we have stayed in Kl so felt it was about time we went into town- airport is 50 K’s out. Taxis cost about 50 dollars each way. Return driver was very garrulous and chattered on about life etc. He felt the middle class were being truly screwed by the system. He knew about the NZ pension system and was very envious.

Said inflation is rife  and living was  difficult(how to get a tip), fuel seems amazingly cheap though.

More flying and eventually we reached London, tired of manhandling all our cursed luggage…Thankfully David was there to meet us and we hurtled off to Liverpool, I slept for most of the three hours. It is cold! All the merino is out, wish I had put my merino longjohns in….

Have  had a couple of walks around Southport, such a pretty town, all Edwardian mansions- David has one…

Went out at 5 am this morning- light at 4 am, one of the town’s night clubs was still open, with some very drunk young people lurching about under the wary eye of two muscly bouncers. On the mainstreet we saw an interesting pair in beautiful suits  and Bently being ‘interviewed’ by the local plods.

When we walked back down the street  half an hour later , Bently was still there , but now being guarded by a young policeman! I suggested it was a pretty flash car for a police car- he laughed and said he was undercover!

Went to Tesco’s and we were very surprised at how much cheaper many things were compared to NZ. Lovely having a strong dollar.

That is all the excitement to date, we head out from here next Wednesday, the long range forecast is for chilly  weather but improving…. 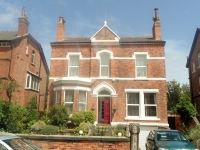